2 Easy Ways to How to Filter Salt Water

Fresh drinking water is a critical resource for those who are out in the wild or are stranded on an island. Knowing how to filter saltwater or ocean water and purify it can make you and me survive for long.

According to usgs.gov, around 71% of our planet’s surface is covered in water, of which the oceans share more than 96%. The official website of Fairfax Water says that only 2% of the water on our planet is glacier ice, which is freshwater, and it is possible to melt it. However, it is too distant to be useful.

It also says that less than 1% of the water on the planet is usable, as it is freshwater. So, what does this mean? Well, it means the majority of water in the wild is salty. So, how about transforming this water into filtered water?

This would be a significant relief, wouldn’t it be? This is especially needed for those who live in the coastal areas or in regions where clean water is just a scarce resource. All unusable water swiftly becomes a valuable source of life-sustaining fluids. Read on to know how to do this.

Can You Filter Ocean Water to Drink?

It is a fact that humans cannot drink ocean water, as it is too salty and dehydrates the human body. Luckily, it is possible to make this saltwater favorable for the human body. This can happen through the process of desalination.

Desalination involves discarding the dissolved minerals, including salt from seawater, treated wastewater, or brackish water. A couple of effective technologies are introduced for initiating desalination, a few of which are distillation, Reverse Osmosis (RO), and electrodialysis.

How Do You Purify Salt Water at Home: Desalination Methods That You Can Try

Turning seawater into filtered water is not as hard as it may appear. With some patience, the desalination methods working on the principle of evaporation are straightforward to follow at home. Let’s check out these methods.

This is the pan that you may have seen in movies in which the hero is stranded on an island. Here, the natural and abundant energy of the sun is used to get fresh water. In this method, you pour saltwater in a bowl in whose middle you then place a cup that acts as an entrapment.

Then, place a plastic sheet over the whole apparatus. This sheet should have a hole in its middle. The underlying notion is that water becomes vapor due to the rising temperature while leaving the dissolved salt behind in the pan.

As the water vapor goes up, it condenses on the plastic surface and trickles into the middle hole. This is an effective method to try if you need such water every other day. It is the easiest filtration system on a budget according to our guide on the best home water softener systems.

The most basic way to set up a solar pan mechanism is to dig a hole in the ground, put a few plants or vegetation for sustaining the need of additional moisture, add saltwater to it, place the cup or bowl in the middle, and cover the hole securely using a large plastic.

This system may not be able to accommodate much saltwater for filtration. This justifies the need for a more efficient method in which the speed at which the parting happens should be more apart from providing more water for processing. This is where distillation is useful. 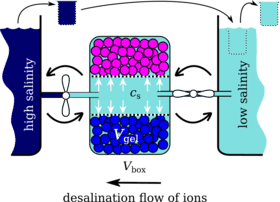 Comprehending this process is the first step to how to filter saltwater. Here, the combination of evaporation and condensation is implemented in a more controlled manner. In this method, water is heated until it evaporates.

Then, the resultant water vapor is exposed to lower temperatures in another compartment, catalyzing the procedure. Rather than waiting for the sun to rise and set, you manually induce the favorable temperatures for obtaining the intended effect.

This procedure works quicker, and you get more filtered water. After some hours, you are likely to get a gallon.

Even this method needs a lot of external heat energy. It is analogous to alcohol distillation featuring a condenser, a closed container, and another box getting the condensed liquid. The closed container having the saltwater is heated, after which the vapor passes through the condenser.

Here, it becomes water again but now free of otherwise contained minerals, including salt. You can set a closed container by covering a pot with aluminum foil and heating it with saltwater on a stove.

Ensure to leave a small hole for a tightly connecting a rubber tubing from where water vapor shall reach the other pot where some portion of the tube shall run. This other pot is your condensation chamber where some ice water will be present.

Finally, the other end of the tube should be positioned into the mouth of a glass jar where freshwater would drop due to gravity. 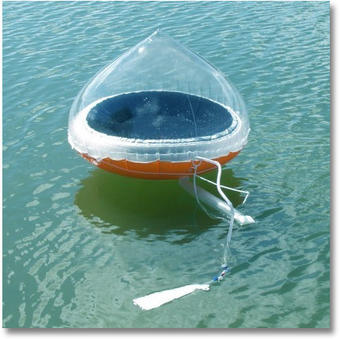 Although distillation sounds easy, it needs coolant and fuel to initiate condensation and evaporation. Thus, for many, it can be a costly affair. This is where reverse osmosis comes into the picture, which several big water treatment plants tend to implement.

In this technique, the treatment facility passes the water via a desalination filter with the help of hydraulic pressure to discard salt and other contaminants. A big desalination pump makes the dirty water pass through the filter.

In big treatment centers, tubes with many layers formed using fragile membranes are used to remove contaminants and salt. On a large scale, hundreds of tubes filter once the water passes through them.

What Filter Removes Salt from Water?

Well, there are many filters for filtering salt from water. There are ion-exchange filters that work by exchanging the ions of sodium and other chemicals with those of other neutral molecules. Then, some filters employ the reverse osmosis or distillation procedure.

Can You Filter Salt Water with a Shirt?

No! Ocean water contains dissolved salt. Filtering it using a shirt or cloth will only discard solid particles and not solutes. Thus, filtering saltwater using a shirt will give you saltwater.

You can filter saltwater obtained from the sea or ocean. The different procedures for the same are distillation and reverse osmosis.

5 Easy Methods To Remove Calcium In Your Water Supply

Facts On How Long Do Zero Water Filters Last?